This Saturday I had the opportunity to drink a magnum of the beautiful RUINART ‘DOM RUINART’ 1996 by the magnum. My dear friend and colleague ‘Miguel Nunga’ invited us to celebrate the grand opening of the new ‘Café Rotsunda’ (a playg round for sommeliers in Sthlm). 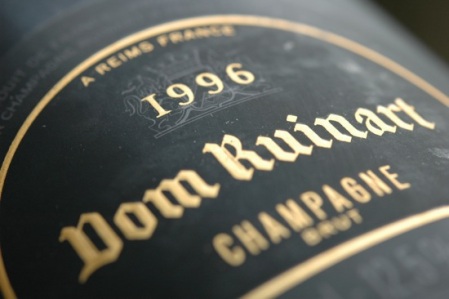 TASTING NOTE ‘A very light and youthful appearance. A mellow aroma with elements of mint and vanilla along with the flowers. The flavour is actually also mellower than usual with a lovely, polished, modern style and in fact almost without any toasted tones up to now. Fine harmonious wholeness. The latest bottle was actually less generous with mineral and incipient toastiness.’ RJpoints 93(95)

According to a variety of sources, the monk Dom Ruinart had almost the same significance during his lifetime as his good friend Dom Pérignon, the man who was described long afterwards as the father of champagne.

Thierry Ruinart (1657-1709), a Benedictine monk from Reims, provided his nephew Nicolas Ruinart with sufficient knowledge to be able to establish the first Champagne House in 1729. The company soon became successful on widely varied export markets, and it was frequently visited on account of its deep, exceptionally beautiful limestone cellars, today classed as a historical monument. Deep down in these cellars, several of the world’s foremost sommeliers competed in the prestige-filled contest Trophée Ruinart. It was not until as recently as 1959 that the House made its first prestige champagne which logically enough was a blanc de blancs from the company’s own grand cru vineyards, presented in an old-fashioned, broad-beamed bottle with a narrow neck, practically identical to those used by the monks. The fantastic Dom Ruinart and Dom Ruinart Rosé wines are made in an antioxidative (reductive) style, and their basic wine is the same as that in the cuvée. The red wine additive of about 15% Pinot Noir comes from their own vineyards at Sillery and Verzenay as well as the unknown grand cru village Puisieulx in Montagne de Reims. The thing that makes Dom Ruinart different from for example Taittinger’s Comtes de Champagne and other high class multi-cru blanc de blancs, such as Pol Roger, Billecart-Salmon and Roederer Blanc de Blancs, is that apart from its basic wine from grand cru villages in the Côte des Blancs, a fairly high proportion of Chardonnay from Pinot villages has also been included. Of these villages, Sillery with its tough, smoky minerality and well-structured body stands for the lion’s share. This makes Dom Ruinart unique and personal. Apart from this fact, it should be noted that since they have been incorporated into the LVMH group, the same yeast is being used as in Dom Pérignon, which is a logical part of the explanation as to why Dom Ruinart is considered by certain people as being a Dom Pérignon Blanc de Blancs, which is a thing that they are naturally not striving for but that has also been my conclusion in a number of blind tastings.

Read Richards article on Dom Ruinart. (To read the full article You need to be a member and logged in at http://www.champagneclub.com)

Error: Twitter did not respond. Please wait a few minutes and refresh this page.

the fine wine blog by Björnstierne