Richard Juhlin got interviewed for Bollinger’s magazine ‘Club 1829’. Read some of his thoughts on Bollinger.

–        What is your personal story with Bollinger / any personal anecdotes with the brand : for example, which was the first Bollinger champagne you ever tasted, on which occasion, what your first impression was.

RJ ‘Bollinger has always been one of my true favourites in Champagne. For many years my greatest Champagne experience, and probably the one that have formed me the most was my first meeting with R.D. in the form of a ultra chocolaty and intensely hazelnutty 1975 Vintage. Disgorged 2 years before. Still I’m dreaming of it and wonder if recently disgorged examples could be close to this experience. My first break as a really good blind taster was with a prestigeous sommelier group in Sweden just when I had started my journey in the Champagne world.  We tasted a lot of great champagnes blind and suddenly there was a wine totally different from the others. The first guy who spoke guessed it was a cava and some others followed describing it as untypical and strange. I just loved it and found it the most fullbodied and an concentrated champagne nectar I ever came across. I hesitated but finally I guessed that it was the heroic 1981 Bollinger ’Vieilles Vignes Françaises’ which I never tasted before just read the tasting notes by my great idol the Champagne Queen Serena Sutcliffe. And I was right!’ 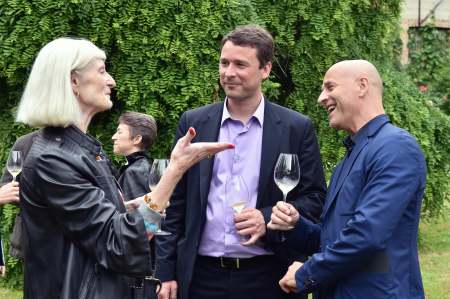 –       Also, what is your strongest memory of a Bollinger tasting (and why did it make such a strong impression on you)?

RJ ‘Of course my strongest Bollinger tasting memory is the one Bollinger showed us last summer directly from the Reserve. Otherwise I clearly remember a flight that I presented at home a few years ago. 1964, 1966 against 1969 Bollinger Grande Année. Two bottles looked perfect but the 66 was half full so I expected it to be maderised and off. When I opened it the cork flew with maximum speed two centimeters beside my eye. The bottle was the best off all wines that night!’

–        What is your personal feeling about the Bollinger brand? How would you qualify its style?

RJ ‘For me Bollinger is the wonderful example showing that tradition and history gives perfection in Champagne. I am so happy that Bollinger stuck to its believe in the 60´s when everybody else changed to stainless steal and purity of fruit. The old style is not better than the modern style but Bollinger is showing that if performed into perfection in every stage such as handeling the oak casks, reserve wines in magnums and above all selection of crus and grapes they are alone in theire style at the highest platform.  For me Boilinger is not an aperitif or summerdrink. For me it shares all the gastronomic beauty of a great Corton-Charlemagne or a La Tache.’

RJ ‘GA or LGA awakes a tingeling emotion every time a new vintage is about to be released. I always cook a sauce of mushrooms and serve it to quail. Then I perfectly know how I can judge it against previous vintages. And not a single time have I been disappointed. For me it’s the best gastronomic wine in Champagne.’

–        More specifically on La Grande Année 2007 : how is representative of the Bollinger style? Is it in the same style of other LGA vintages you ever tasted?

RJ ‘’07 I think my tasting note says it all. Except that it at the same stage reminded me of the ’83 when it was released with its classic note of chocolate and hazelnuts strongly present from the start.’

RJ ‘Always quail and mussrom sauce. But I also suggest soya and lime marinated Salma salmon or sweetbread with dried apricots and mango or a classic turbot with a creamy Chablis sauce.’

RICHARD JUHLIN ON BOLLINGER Joseph Bollinger was the German from Würtemberg who founded this ancient house in 1829. The French called him simply “Jacques.” The firm’s large estates in the best Pinot villages were bought by his sons Georges and Joseph, and in 1918 it was time for the next Jacques to take over the property. He became the mayor of Aÿ, but died during the German occupation at the age of forty-seven. The most colorful person in the history of the house is his widow, Lily Bollinger, who kept a watchful eye on every bunch of grapes by cycling through the vineyards regularly. Her rigorous demands for quality still run through the house to this day. Now Bollinger is run by Jérôme Philipon, who control over 144 hectares, providing 70 percent of the grape supply. The winemaker today is Gilles Descôtes. Besides the house’s exceptional vineyards, they also use very expensive vinification methods. All the vintage wines are fermented in small, aged oak barrels and are never filtered. Malolactic fermentation—which would probably take place very late in the process—is not encouraged either. The reserve wines are stored at low pressure in magnums. Bollinger make the heaviest and most full-bodied champagnes of any house, and their wines always have a smoky and hazelnut-y complexity that is very hard to beat. The vintage wines are among the very best, but the question is whether the rare and fantastic Vieilles Vignes Françaises, made with grapes from non-grafted Pinot vines, can reach even greater heights. All wines highly recomended.

One thought on “Richard Juhlin interview in Bollinger’s ‘Club 1829’”

Error: Twitter did not respond. Please wait a few minutes and refresh this page.

the fine wine blog by Björnstierne